Mayor Faulconer reaffirms support for Community Choice in State of the City address.

On January 15, Mayor Kevin Faulconer delivered his 2019 State of the City mayoral address at the Balboa Theater in Downtown San Diego. The speech highlighted his major accomplishments in the previous years and outlined the top priorities for his remaining time in office. 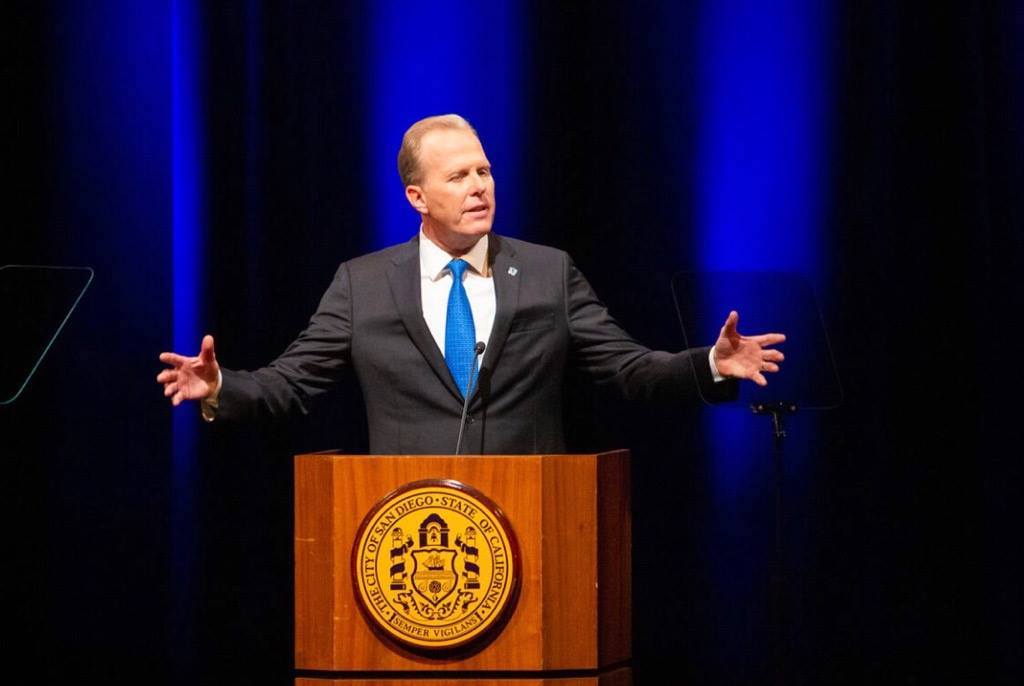 Early in his address, Faulconer placed heavy emphasis on tackling the housing crisis as the first step in a holistic approach to solving homelessness in our city. He described an ambitious plan to simplify bureaucracy by eliminating building height limits and parking requirements, and authorize unlimited housing density given the development provides affordable housing options. He wrapped up his address by reemphasizing his commitment to implementing Community Choice Energy in San Diego.

“The best way to make us the greenest city in the nation is to give San Diegans a new choice on where they get their power – Community Choice Energy!” said Mayor Faulconer nearing the end of his address.

CCE empowers the local government to purchase power on behalf of their residents and businesses. This ensures residents are getting fair rates on energy sourced from 100 percent renewable energy, as outlined in the city’s Climate Action Plan. The program provides much-needed competition to San Diego Gas & Electric, who notoriously charges some of the highest rates in the country.

Mayor Faulconer says that CCE will “inject healthy competition into the marketplace, allowing customers to benefit from lower energy costs, and pick greener energy sources to power their home or business.”

While CCE may seem like a relatively new concept, in reality, local nonprofits and climate champions have been advocating for this initiative since 2015.

“We will fight to preserve the right of every family and every business in every corner of the San Diego region to create a better, healthier and brighter future with locally made clean power,” stated Nicole Capretz, Executive Director of the Climate Action Campaign. And that is exactly what they did.

But getting CCE approved was only half the battle. San Diego is now undergoing the tedious process of determining how to implement the program in time to meet the city’s Climate Action Plan goal of 100 percent renewable energy by 2035.

In order for San Diego’s implementation of CCE to best support the local residents, environment and economy, it is imperative that the business plan supports local impacts. This can be achieved by building local renewable energy projects, allowing companies like Sullivan Solar Power to grow, hire more San Diegans, contribute to the local economy, lessen our air pollution and reduce our carbon footprint.

There are currently more than 200 solar companies indigenous to the region, employing over 3,000 professionals and contributing over $1 billion in economic activity per year. These impressive statistics could be even more compelling if local solar projects are prioritized with San Diego’s CCE program.

“San Diego’s Community Choice Energy should continue to serve San Diegans by maximizing the potential of rooftops, parking lot carports and other reusable solar sites and storage in the city,” said Daniel Sullivan, founder of Sullivan Solar Power, one of the longest running local solar installers in the region.

Mayor Faulconer’s commitment to CCE makes a powerful statement for clean energy policy and energy independence. Let’s see if he can continue to put his residents and communities first by investing in local projects to see CCE through.

To hear from Daniel Sullivan, Nicole Capretz, Mayoral Candidate and Climate Action Plan author, Todd Gloria, and many more industry experts on the future of renewable energy in San Diego, attend the SD Solar Experience Kickoff at locations around the county. To learn more and reserve seating for this event, visit the website at www.sdsolarexperience.org.