Elected Officials Join the Thacher School in Celebration of Sustainability

The Thacher School, Sullivan Solar Power, Bold Rock Energy Group, and the Ojai Chamber of Commerce recently came together to reveal the completion of one of the largest solar power systems at a private school in California. An honorary ribbon-cutting ceremony was held at the Thacher Schools Ojai campus in Ventura County to showcase the new system. 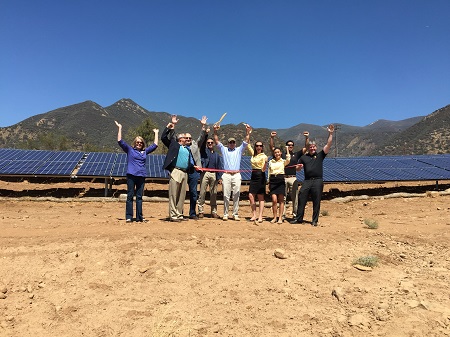 This ceremony was a collective celebration of sustainability, education and future generations, and a source of individual acclaim for both the Thacher School and Sullivan Solar Power. The solar power system will assist in achieving the newest version of the world’s premier benchmark for high-performance green buildings, the Leadership in Energy & Environmental Design (LEED) certification. The school is using the solar array to help obtain the renewable energy production credit for a dining facility being built later this year, pursuing LEED version 4 Building Design and Construction Gold certification.

“Solar power, once the mere path to the future, is now the happy road we trod each day at Thacher. Bathed in sunlight, we are fortunate to be able to power our energy needs with the beneficial rays of the sun and reduce our carbon footprint significantly, a win-win,” said Michael Mulligan, the Head of the Thatcher School. “We’re thankful Sullivan Solar Power completed this critical project with energy, focus, and excellence.”

For Sullivan Solar Power, this 676,139-watt solar powered system represents the largest single site installation in the 12-year history of the company. The solar project is using 2,898 locally manufactured Kyocera 265-watt solar panels and is expected to produce more than 1.2 million kilowatt-hours of clean energy each year. This ground-mounted solar system will annually offset 1.4 million pounds of carbon dioxide emitted into the atmosphere.

“The Thacher School has set the standards, and exceeded them,” said Daniel Sullivan, founder and CEO of Sullivan Solar Power. “The school is practicing what they preach by incorporating solar into students’ curriculum and creating a brighter future for the community.”

Collectively, this project fueled a collective mission of developing a better and brighter future. Students will now have the opportunity to view the solar power system’s live monitoring site and calculate data complementing their science, technology, engineering and mathematic skills learned in school. The project takes a step in the direction of fulfilling Sullivan Solar Power’s vision of creating energy independent communities.

About the Thacher School

The Thacher School is a co-educational boarding high school (grades 9-12) located 85 miles northwest of Los Angeles, California. The School serves academically talented students who will benefit from a rigorous college preparatory experience. The faculty and students live and work closely together in a community in which cooperation, trust, honesty, and respect are the cornerstones of school life.

Together, we commit to the belief that demands in the academic classroom, when combined with those of mountains and horses, of sports and the arts, produce independent minds, strong bodies, and powerful character.

Sullivan Solar Power is a turnkey solar system provider that delivers solar electric projects from concept to completion. The company has installed more than 50,000,000 watts of solar power ranging from small-scale residential to large-scale commercial and municipal systems. Sullivan Solar Power was founded by Daniel Sullivan in 2004. Sullivan Solar Power has a longstanding A-plus rating with the Better Business Bureau, with no complaints filed since the business began. The firm has been named one of the fastest growing energy companies in the nation by Inc. Magazine and services all of Southern California. Sullivan Solar Power has been voted San Diego Union Tribune’s Best Solar Power Company of 2016. Regardless of project size and scope, Sullivan is committed to delivering the best products and the most qualified professionals to its customers. Visit sullivansolarpower.com or call 1.800.SULLIVAN for more information.