Obama visited San Diego this week for what is likely his last trip to the area as President. Rally attendees gathered in La Jolla and greeted the President as his motorcade made its way to a fundraiser nearby. The rally presented an opportunity for San Diegans to highlight their frustration with our nation's reliance on fossil fuels and its negative cultural and environmental impacts. 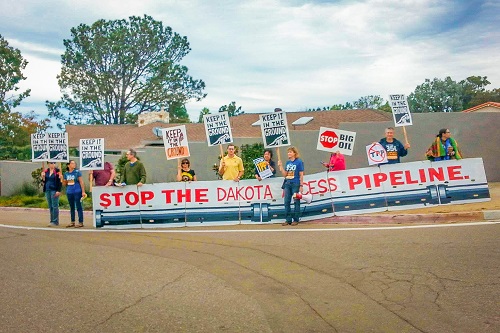 The Dakota Access Pipeline (DAPL) is a $3.7 billion project that would carry 470,000 barrels of oil a day from the oil fields of western North Dakota. The DAPL project would extend 1,168 miles across North Dakota, South Dakota, Iowa and Illinois. If built, the pipeline threatens sacred sites and culturally important landscapes to Native Americans in the region.

Potential impacts are not just cultural, but also environmental. There have been many instances where other oil pipelines have resulted in significant environmental and health implications. If the DAPL were to break it would cause catastrophic environmental damage as the pipeline will cross directly under the Missouri River.

Fortunately, there is now a growing awareness among communities of the need to break free from fossil fuels. Michael Brune, Executive Director of the national grassroots environmental organization the Sierra Club, has said “people will continue to mobilize until Big Oil and other corporate polluters recognize that communities will not stand by while their health and welfare are sacrificed for the sake of profits.”

The recent acceleration of renewable energy adoption has outlined that the transition to a nation powered by 100 percent clean energy is possible. The White House has outlined that it is “committed to ensuring that every American family can choose to go solar and to cut their energy bills – and that every American community has the tools they need to tackle local air pollution and global climate change.”

This week’s rally provided an opportunity to reiterate to the President that the development of fossil fuel infrastructure is not desired nor required in the United States.