Sullivan Solar Power joined solar companies from across the state to support the future development of solar energy at the annual Solar Worker Lobby Day in Sacramento. Organized by the California Solar Energy Industries Association (CALSEIA), the day highlighted the significant potential for job creation from a thriving solar energy industry with over 80 employees representing their respective solar energy companies.

Solar industry workers were invited to share what their solar power careers mean to them with legislators from across the state. For Sullivan Solar Power’s Chris Dixon, the California solar industry empowered him to pursue his ambition to play a role in the solar revolution, which was not possible in his home country of Ireland.

“Without legislators supporting solar policies, my career and likely that of the 75,000 others in solar in this state would not be possible” said Dixon, Public Affairs Administrator at Sullivan Solar Power. “I am very grateful to the progressive and forward thinking nature of California communities and businesses who embrace solar energy every day, because ultimately it is they who have provided me with a worthwhile career that I am very proud of.” 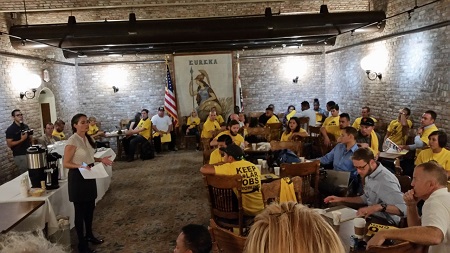 Securing Solar for All

One of the legislative priorities of the Solar Worker Lobby Day focused on ensuring market certainty for rooftop solar throughout the state, especially in municipal utility territories. Many municipal utilities are replacing Net Energy Metering with programs that kill solar, causing job losses and taking away a customer’s right to go solar.

This is particularly relevant in the Imperial Irrigation District, where more than 1,000 people who have attempted to go solar have been stuck in limbo waiting to have their solar systems turned on.

Sullivan Solar Power met with the staff of Assemblywoman Lorena Gonzalez of San Diego and highlighted the positive impact that the solar energy industry has had in San Diego, where solar is now estimated to be a $1 billion industry.

The group also met with an additional six legislators including Assemblywoman Catherine Baker and Assemblymember Jim Frazier. In total, solar employees taking part in the day of lobbying met with more than 50 state legislators and represented one collective voice highlighting how important solar is to their jobs, the economy and the planet.