There are two key policy changes that potential solar customers in the state of California need to be aware of. These upcoming changes will create an unprecedented surge of demand for solar, because both changes will make the economics of going solar less advantageous. One is a federal issue, the other is state level issue; coincidentally they are both scheduled to go into effect around the same time. It is certainly in the best interest of anyone considering going solar to do so now, in advance of these changes.

Since 2008, the 30 percent Federal Investment Tax Credit (ITC) has been one of the most important policy mechanisms supporting the deployment of solar nationwide. The ITC has been a leading driver of solar growth and job creation. On December 31, 2016, the ITC will revert down to 10 percent for commercially-owned systems, and go away completely for residential owned systems.

Assembly Bill 327 (AB 327), which was signed into law last year, directs the California Public Utilities Commission (CPUC) to establish a new net-energy metering (NEM) framework. This new framework or successor tariff is being referred to as “NEM v2.0.”

AB 327 stipulates a deadline of December 31, 2015 for the CPUC to finalize the rules for NEM v2.0. While we won't know the final rules for another 18 months, it is safe to assume that NEM v2.0 will not be as good a deal as "full retail credit" NEM offers today. AB 327 codifies into law that the new NEM v2.0 will go into effect on July 1, 2017, OR when a utility hits a stated capacity cap based on five percent of their customer's aggregate peak demand, whichever happens first. The five percent capacity cap stated in megawatts (MW) for each utility territory is as follows: SDG&E: 607 MW, SCE: 2,240 MW, PG&E: 2,409 MW.

Based on projections these caps are expected to get hit well before July 1, 2017. The fact that the Federal ITC sunsets at the end of 2016 will create a swell of demand, and likely accelerate when the cap gets hit. It is impossible to predict exactly when each utility will hit their cap; our best guess right now is sometime between January 2016 and January 2017. 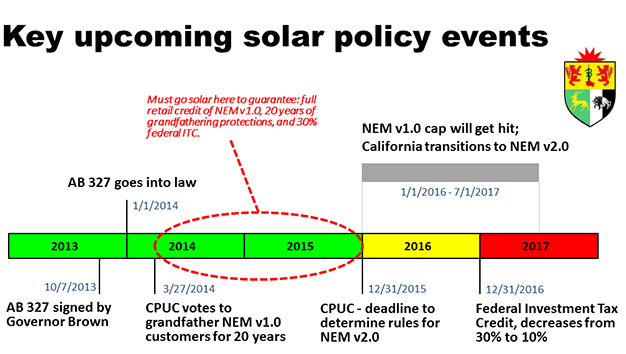 Last month the CPUC voted to grandfather all customers who get in before the NEM cap is hit, for 20 years from the time they came online. These current customers (with "NEM v1.0") would be protected under the rules of the current NEM framework, most notably the guarantee to continue receiving full retail credit for any energy sent back to the grid. This decision by the CPUC was considered a win for the solar industry, as they clearly rejected the utilities proposals which sought a transition period of just 6 to 12 years.

The Time to Go Solar is Now

It is clearly in the best interest of any customer considering solar, to go solar now rather than later. A customer going solar today is guaranteed to get: (1) the full 30 percent Federal ITC, (2) "full retail credit" on any energy they export back to the grid, via the NEM v1.0 program, and (3) the certainty of 20 years of grandfathering protections from the time they interconnect. The solar industry is bracing for a large surge in demand, because of these critical upcoming policy changes. One of the CPUC commissioners recently used the phrase "gold rush" to describe this upcoming market situation. Reputable firms like Sullivan Solar Power will likely experience growing customer backlogs starting in 2014, and going into 2015. Customers need to be aware of the timeline above, given that we could hit the NEM cap in early 2016, assuming an aggressive projection scenario. In order to guarantee your place in line and all the current incentives, customers need to be signed and under contract in the not-too-distant-future. From a policy perspective it has never been clearer: the time to go solar is now.

Sullivan Solar Power customers are welcome to contact Adam Gerza, Director of Government Affairs with any questions or comments. Sullivan Solar Power is the only Southern California based rooftop solar installer to employ a full-time Government Affairs representative. We participate directly in all relevant policy issues at the CPUC and in Sacramento, working to protect the interests of our existing customers.