The first day of May was the longest of all those I used to gather what was in demand regarding NABCEP Company Accreditation. I had everything I needed. Every document, certificate, and signature laid on my desk grouped in binders and labeled stacks.

Two binders held information that needed to be scanned and copied prior to submission. I spent a couple hours by the printer completing this task. Once done, I reported to Dan who already had an idea of how the sum of these requirements were to be submitted. They all were to be assembled in one large binder accompanied with a cover letter and table of contents. Each tab was to explain what followed it. The two binders were also to make up this collection. A proper cover image was to be produced and more documents needed to pass through the printer. 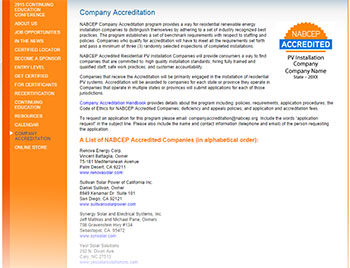 I went to work. While a project manager created the image and Dan typed up the cover letter, I organized a three ring binder three inches wide with all the paperwork. Between scanning and copying, I took my time labeling each exhibit that made up the entire presentation. The application itself was further revised and other accounting documents were signed. After each stray piece was handed to me, I approached Mr. Sullivan with the binder that resembled an overgrown dictionary that lay open on a podium in the middle of the library at my university.

I left his office with a sigh of relief. By the time I made it to my desk, he called me back up. In his office I saw the binder riddled with pink post-its. They each explained what modification needed to be made. Some of them even pointed out a page or two that I somehow scanned backward or upside-down. I retrieved the binder, made the corrections and gave it back to Dan. This time I did not leave his office, and again, more changes were to be made. This process was repeated three more times as Dan stumbled upon mistakes he did not catch before. 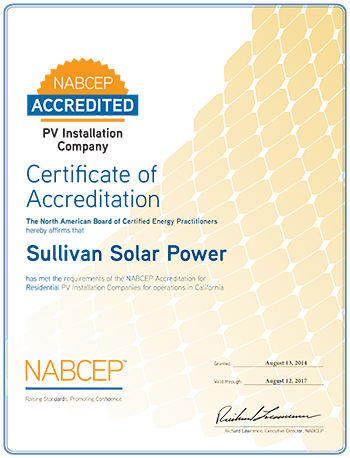 The final time I stood and watched him thoroughly review, what he temporarily nicknamed by then, the ‘Sullivan Solar Power Bible.’ He turned the last page with a smile. “Send it in,” he said. I took binder from him happily. Afterward, I pretty much skipped all the way to the executive assistant‘s desk who had been tasked with mailing the submission. Wide-eyed and surprised at its size, she took the hefty binder and found a suitable box for it.

Having completed my assignment, I gathered my belongings and made my way to the door. Before I stepped through it, the executive assistant called out. “I bet you're gonna sleep good tonight!” I turned smiling and nodded. Indeed I would.

Moments later a mass ‘Thank You’ email was sent out from Dan to the team. I was recognized for my accomplishment. I must say however that it took the company as a whole for me to make anything happen. And while May 1, 2014 marked the day our application went in, the company still needed to pass three random audits on residential installations. I knew we had that in the bag and continued moderating the process to assure our accreditation.

Months later an email was forwarded to me from Dan revealing that we had met all requirements, passed the site inspections and became a NABCEP Accredited Company on August 13, 2014. This development was a long one that began before my 23rd birthday. The idea was conceived the previous year, yet with patience and persistence, Sullivan Solar Power is now the 1st San Diego and Orange County NABCEP Accredited PV Installation Company.