The Road to NABCEP Accreditation – Part I

This particular Thursday for which my birthday fell on was groundbreaking; behold the beginning of my Jordan-year. It was my kickoff to finally go big or go home, (figuratively of course). Furthermore, it was a work day, like any other weekday, or so I thought. Dressed to impress, and smiling big, I went about my work routine. Barely three hours in, I received an email from my boss. It was a thread that had been forwarded to me with a subject line that read, “Comp Accred Info Sheet”. I did not read into it, but after the simple greeting the first words of the body were, “Good news – I volunteered you…” Great. At this point in time I had only been a Sullivan Solar Power team member for three months. I was recently trusted to do, on my own, the tasks from my training. I managed customer portfolios, posted news articles and was responsible for comment moderation. I figured it would only be a matter of time before I could advance and be responsible for other duties. I read on.

I discovered that the president of the company considered me for the assignment as well. I found this enlightening. I finished reading the message, and dissected the thread that accompanied it. I concluded that an application coordinator from the organization, NABCEP, wanted information that the president and my boss alone did not have time to collect. There was a list of requirements for an application meant to accredit a company. It was quite substantial. There were requests for policies, programs, assessments, certificates, and more. All I could think of after realizing that the president sought to prove his company worthy of such an accreditation was the question, where was I to get all of this information from?

The North American Board of Certified Energy Practitioners, or NABCEP, was not unfamiliar to me. In fact, the organization had lately been the talk of the office. Then, for weeks at a time, about every week for months, a group of employees would disappear and reappear with orange and blue texts books wearing either worried or relieved expressions. The owner and president of the company, Dan, saw to it early on that his Sullivan clan should possess the knowledge required to obtain, at the very least, a NABCEP Entry Level PV Exam Certification. Gradually employees went in for training, took the exam and anxiously waited for the results.

Why was any of this significant? For starters, a NABCEP accreditation, or certification for that matter, is a thing of high regard. It permits the credibility of a quality business or personnel. It is the, “golden standard”, and what better thing to do than to go for the gold. This project was my chance to prove myself capable of being an exceptional team player, so I accepted it willingly. The first thing I did was download the pdf of the company accreditation handbook supplied in the email. After, I printed it, and read it all the way through. I read it multiple times actually. Each time there was a new line to highlight and an additional note to make. By the end of the fourth reading, I had provided myself a route. The who’s, what’s, and where’s were marked and I began my journey. 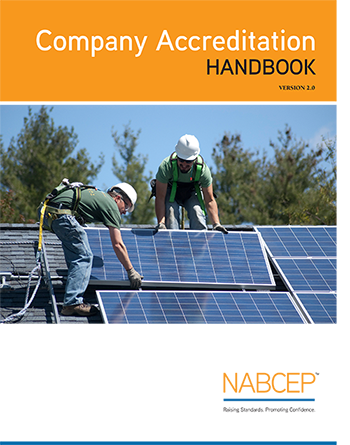 The Sales Personnel Qualifications required more than what it is deemed. At the very least, 20% of Sullivan Solar Power’s sales team needed to pass the Entry Level PV Exam and retain an OSHA endorsement within six months of being hired. Other obligations meant that certain team members needed to own even higher levels of certification successfully for a year or more. They are the Technical Sales Certification and PV Installation Professional Certification. Included was the need to be OSHA certified with 30 hour safety training. I tipped my hat off to the qualified group, for those trainings are vigorous, and the exams, beastly. Now piece together the dispatch of employees to NABCEP training and their assignment to be certified along with this attempt to accredit the company as a whole. It makes sense now doesn’t it?

While I waited for Dan’s response, I looked into other sections of the requested I figured I could handle; policies. NABCEP asked for six; a Customer Service Policy, Company Administration Policy, Employee Policy, Health and Safety Policy, Environmental Policy, and Community Involvement Policy. All that I knew of were those regarding the employee and company administration. I whipped out my own manual and read it over to ensure that the details listed by NABCEP were duplicated within its pages.

Later, Dan provided me the list of qualified and soon to be qualified personnel. I countered the email asking to be directed toward the locations of the remaining policies. It came to be that three of the four were not to be found but instead created. As many documents that circulate throughout the company and the few that land in the hands of the customers, none could be dubbed official for the likes of NABCEP. With this, let it be known that we strive to exceed standards.

My birthday had blended into a week of uncovering information meant for Sullivan Solar Power’s advancement. I told myself then that it was the gift of purpose, (happy birthday to me). The following months were not easy, and yes, they were months. This task was not to be completed in a matter of weeks. More employees had to be certified, policies were to be typed up, and the application coordinator at NABCEP would be due for an influx of calls I was to make to her for clarity and reason. There was of course some down time, but even then I had to be on my guard. However, it will be unveiled that there would be no chance of reprieve until May.