The North County Fire Protection District has powered up five separate fire stations and one maintenance facility in northern San Diego County to run entirely on solar electricity, with the six facilities now supplying more clean energy to the power grid than they consume.

The North County Fire Protection District (NCFPD)’s Fire Station 5 in Bonsall is the latest to convert to solar, with a 47,500-watt solar system completed this month. All six of the solar projects were installed by Sullivan Solar Power, which won the contracts in two separate competitive bidding processes using Kyocera Solar panels and SMA America inverters. 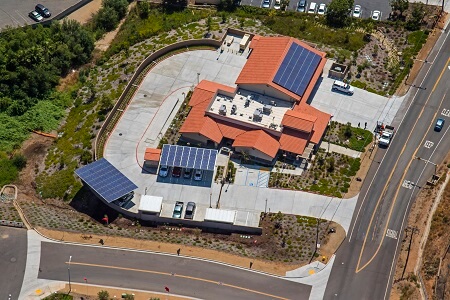 The NCFPD serves approximately 50,000 residents in the communities of Fallbrook, Bonsall and Rainbow. The District, which is funded by local taxpayers, benefited from a one percent interest loan through the California Energy Commission’s Energy Conservation Assistance Act to fund the solar projects. NCFPD has been cash-flow positive on these six solar projects since the first month of the first phase and has projected energy savings of more than $65,000 annually.

“Our electricity bills were one of our largest expenditures and solar was the ideal solution,” said Greg Wilson, Battalion Chief for the NCFPD. “Our first five solar installations have exceeded performance guarantees in their first year and the savings from all six systems help stabilize our electricity rates.”

Fire season is in full swing, and the savings from going solar will allow the District to focus on emergency preparedness with an appropriate level of staffing and services, Wilson said.

“We are thrilled to help the District become energy independent and believe other fire stations can take inspiration from this model as they seek ways to reduce operating costs while continuing to provide an invaluable service to the community,” said Daniel Sullivan, founder and president of Sullivan Solar Power. “To further reduce fossil fuel consumption and to support our local economy, Sullivan Solar Power again used Kyocera solar modules for the second phase of the project.”

The District is utilizing the net metering-aggregation tariff with San Diego Gas & Electric, where solar on one property can offset other electrical meters on adjoining properties. As a result, Fire Station 1’s 76.3kW solar system generates enough electricity to offset the energy used at Fire Station 1 and at an adjacent communications tower, meeting room, ballpark and well pump.

“The North County Fire District is a great example of solar’s ability to immediately impact the bottom line, freeing up much needed public funds to better serve the community,” said Cecilia Aguillon, Kyocera Solar, Inc.’s director of market development. “It’s gratifying to see the benefits of our system helping improve the fire district’s budget as well as its performance leading to an expansion.”