The Future of the Investment Tax Credit Under President Trump

There was much speculation following the presidential election on the future of the solar Investment Tax Credit (ITC). The ITC is a 30 percent tax credit for the purchase of solar systems on residential and commercial properties and has been a driving force for the growth of solar across the United States. In fact, the solar ITC has helped annual solar installation grow by over 1,600 percent since the ITC was implemented in 2006 - an annual growth rate of 76 percent.

President-elect Donald Trump has made no secret of his opinions on climate change, which sparked a discussion on future federal support for Americans who want to play their role in the solar energy revolution. However, this concern may not be required as neither Trump nor his advisors indicated during the campaign that they wanted to repeal federal tax support for wind energy, solar energy and other renewables. In fact, it is likely that solar energy at the national and state level will continue to grow due to three key factors. 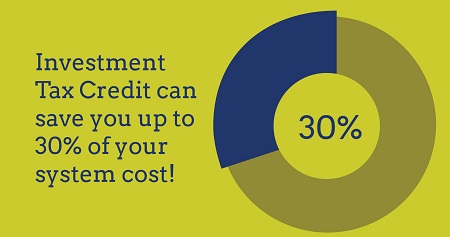 The ITC Has Bi-Partisan Support

The ITC has received bi-partisan support from members of Congress and to remove it would result in an expected backlash from the elected officials who strongly supported the ITC extension in December of 2015. Of those in the Senate and the House of Representatives who voted to pass the ITC extension, 90 percent will return to office in 2017 as part of the 115th United States Congress.

As outlined by Dan Whitten of the Solar Energy Industry Association, solar energy “offers a lot of the principles that Mr. Trump espouses -- jobs, economic development, competitiveness. Solar is a train that is moving forward very quickly. And there would no reason to stop it." In 2015, the solar industry was responsible for creating 208,859 solar jobs in the United States, while 75,598 of these were based in California. The solar job market continues to grow, for proof just check out current job openings at Sullivan Solar Power. 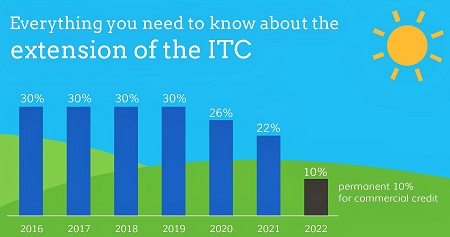 The state of California has positioned itself as not just a national, but a global leader in the solar energy revolution. California has set some of the most progressive renewable energy targets which are set in statute and cannot be changed at the federal level. It is predicted that California’s position on renewables will not only fuel adoption in this state but also drive the growth of renewables in the Western U.S. electrical grid from within the Pacific Ocean itself to Wyoming.

The ITC will remain at 30 percent until 2020, when it will reduce to 26 percent. It will reduce to 22 percent in 2021 before it expires in 2022 for all residential customers and remains in place at 10% for commercial solar projects.

For more information about solar tax credits for solar power systems installed in San Diego and other financial incentives regarding solar power systems, contact a specialist at Sullivan Solar Power. We will sit down with you and discuss all your options.