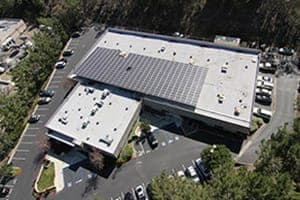 “IBEW 569 is proud to partner with our union contractor, Sullivan Solar Power, to unveil next-wave electrical technology at our Union Hall,” said IBEW Local 569 Business Manager Nick Segura, “This battery storage unit will help us energize our Hall at night from collected solar energy on our Electrical Training Facility rooftop.”

When the International Brotherhood of Electrical Workers Local 569 decided to retrofit photovoltaics on its electrical training facility, Sullivan Solar Power was contracted to provide the roof-mounted super structure and array. Visible from the 163 freeway and Balboa Ave, this monolithic array is comprised of 430 Sharp solar modules, manufactured in the United States, and 18 SMA inverters. Sullivan Solar Power designed and installed a steel superstructure to elevate the entire solar array above the roof surface. As a result the system capacity was dramatically increased from what other consultants had told the IBEW could be installed.

By installing the Clean Energy Storage’s POWERGRID 30 solar battery unit, Union Hall is now a net zero operational facility. A net zero operational building is where all or a portion of energy loads or daily core business activities consume the same amount of energy that is produced onsite using renewable energy. The energy produced by the rooftop solar meets Union Hall’s energy needs during the day and the energy storage meets the needs at night.

The battery unit is made up of multiple inverters, charge controllers and batteries all coupled together and housed in a single outdoor enclosure. It supplies all the power for select electrical loads at night when the solar is no longer producing or upon a power failure with the utility. In comparison, a residential battery like the 10kWh LG Chem Residential Energy Storage Unit (RESU), which can only power two critical circuits at a time. This battery shifts the primary source of power from the grid to battery or, in other words, from the utility to backup power.

On average, each year a solar energy system this size will: