A Decade of Support for Solar

The new framework also included a major shift in the way solar incentives were calculated - away from a system that funded solar incentives based only on nameplate capacity and towards one where incentive levels are based on performance factors such as installation angle, tilt, and location. This performance framework ensures that California is generating clean solar energy and rewarding systems that can provide maximum solar generation.

The CPUC developed the program rules for the California Solar Initiative through a public rulemaking process. Among the major policy decisions made by the CPUC's rulemaking were how to organize and adjust the incentive levels, how to provide performance based incentives, how to require metering, and how to develop program rules in the form of a Program Handbook. The rulemaking also decided issues related to low income solar program development, marketing and outreach, research, development and demonstration (RD&D), program measurement and evaluation, and the Self Generation Program, which provides incentives to wind and fuel cells.

The incentive level available to a given project is determined by currently available incentive in each utility territory for each customer class. The CSI was designed so that the incentive level decreases over ten steps, after which it goes to $0, as the total demand for solar energy systems grows.

The CPUC divided the overall goal of 1,750 megawatts by the ten declining steps. Each step has megawatts allocated to each Program Administrator and customer class, residential and non-residential (a combination of commercial and government/non-profit). Once the total number of megawatts for each step is reached within a particular customer class, the Program Administrator moves to the next step and offers a lower incentive level for that class. Therefore, high commercial demand in SCE's territory will not lower the incentive level offered to PG&E's residential customers, and so on.

Figure 1 offers a visual explanation of the increasing megawatt installations and decreasing incentive levels over the life of the program. The orange box in each "Incentive Step Level" represents the available megawatts at that incentive value. The yellow box represents the cumulative installed megawatts as the program proceeds through the steps. 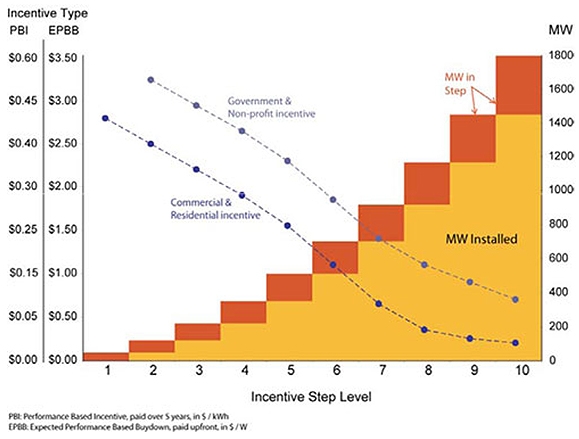 The California Solar Initiative pays solar consumers their incentive either all-at-once for smaller systems, or over the course of five years, for larger systems. The program's two incentive payment types are:

In addition to the California Solar Initiative, San Diego homeowners who go solar in 2012 can participate in the San Diego Solar Program. To learn more, click here.

Committed to Solar Education.
Dispelling Myths. Promoting Facts. Sifting Through the Noise. Live seminars with nonprofit organizations or learn online at your own pace? The Choice is Yours.
Attend Free Seminar Visit Online Academy