Paying cash for your solar power system up front provides the maximum savings by eliminating both your electrical bill as well as the need for financing your purchase. When you pay cash, you can benefit from the 30% Residential Renewable Energy Tax Credit and keep that cash in your pocket instead of handing it over to the bank or a solar power lease company.

Paying cash also can provide the shortest solar power pay-back period, generally between 4 and 7 years. In addition, paying cash simplifies the process of going solar, since there is no need to secure a loan, find a lease or undergo credit checks. That means we can start your solar power project faster.

With the shortest pay-back period of any purchase option, your cash investment in going solar will be back in pocket after just a few laps around the sun and deliver an increasingly greater return on your investment as energy gets more expensive with time. 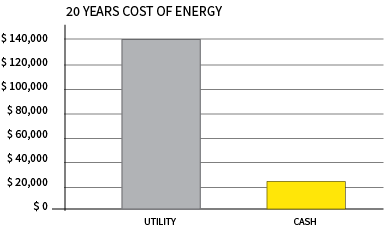 About the Chart Below

The chart below represents a sample of the cumulative cost of buying a 7-kilowatt Sunpower solar system with cash compared to staying with your local power utility over a 20-year period. The savings and costs shown are samples for a typical Southern California homeowner and not necessarily representative of what you would pay or save by going solar. The pricing and savings in the chart are just estimates and should not be considered a quote of pricing from Sullivan Solar Power.

One line represents the annual cost of a solar power system and the other line shows the increasing cost of buying power from your utility. As the chart shows, over the first 20 years you own your solar energy system, your utility bills would rise steeply to a total cost of $140,000.

However with a cash purchase, you would pay a total system cost of $33,250, which would be reduced to $23,275 after you receive and apply the 30% Residential Renewable Energy Tax Credit, saving more than $116,000 by going solar.

In year five after going solar, your solar power system will have paid for itself. That’s when your savings from going solar will match your initial financial investment and is also called your “pay-back period.”

As the chart below illustrates, while the cost of utility energy keeps rising, the cost of your cash purchase of a solar power system stays steady. Historically, utility energy rates rise by an average of 6% per year, which really adds up over the course of the typical 20-year life span of a solar energy system.

Back to Financing Options