On Friday, June 28, hundreds of members of the Irvine community gathered for the Celebrate Irvine awards, which highlighted local leaders in the business and nonprofit sectors. The event also marked the 40th anniversary of the Greater Irvine Chamber, an organization that has played a critical role in developing Irvine as a key destination for innovation, business, health and leisure. In a ceremony presented by Irvine Chamber CEO Bryan Starr and Irvine Mayor Pro Tem Anthony Kuo, the 2019 Irvine Business of the Year award was presented to Sullivan Solar Power, a local solar firm with 15 years in business. 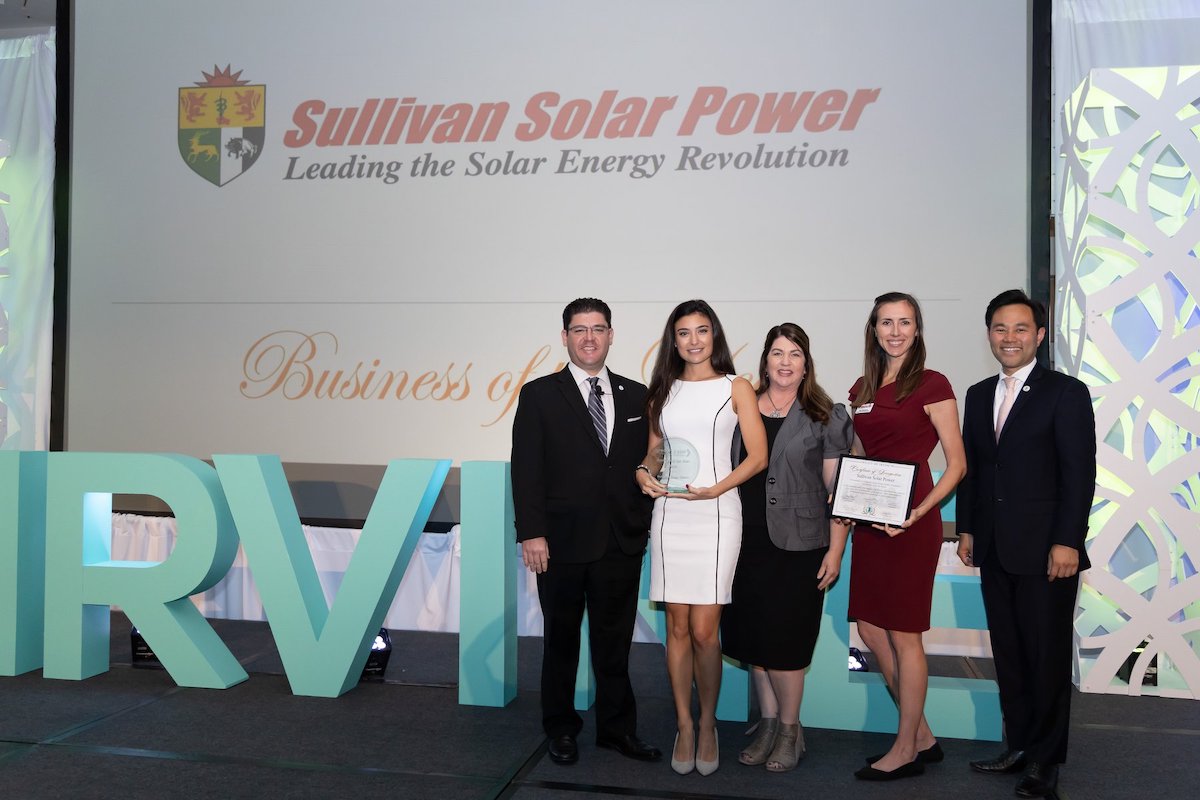 “Sullivan Solar Power has been exemplary in enhancing the local economy through job creation,” said Bryan Starr, president and CEO, Greater Irvine Chamber. “Growing from a new company in an industry that was still developing at the time, Sullivan today has proven that commitment to the community it serves along with its organizational goals, is a foundation for business success. We’re proud to name Sullivan Solar Power as the Chamber’s 2019 Business of the Year.”

The award honored Sullivan Solar Power for their tenure in the industry, being recognized as a trailblazer in an emerging industry when the company was first formed by Daniel Sullivan in 2004. At that time, Daniel Sullivan only had $2,500 in the bank, and with true entrepreneurial spirit and hard work, developed a company that was a solution to our global energy crisis. He aspired to use his trade as an electrician to develop energy from the sun, all while creating a local workforce and providing savings for families and institutions. Since then, the company has installed over 8,500 solar power systems throughout Southern California, including multiple projects for UC Irvine including their new Middle Earth housing complex, the Port of Long Beach, the Navy, Camp Pendleton the San Diego Padres and more.

“We are honored to be recognized for our hard work and commitment to the community,” said founder and president Daniel Sullivan. “Irvine has been an important place for us to grow our business and work to fulfill our mission to change the way the world generates electricity.” At the celebration, the award was accepted by Ms. Selene Lawrence, Director of Government Affairs, Mrs. Tara Hammond, Director of Community Development and Ms. Emily Padilla, Community Development Manager. Sullivan Solar Power has also been recognized for women in leadership positions, in a traditionally male-dominated industry.