Sullivan Solar Power, an electrical contractor headquartered in San Diego, California, was recently recognized by the National Electrical Contractors Association with a NECA Project Excellence Award in the Educational Under $1 Million category for its outstanding solar design and installation at Cathedral City High School, located in the Palm Springs Unified School District. 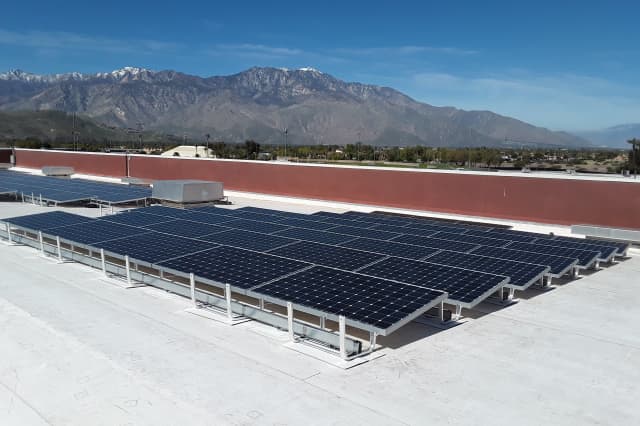 "Winning a NECA Project Excellence Award is a prestigious accomplishment," stated National Electrical Contractors Association (NECA) San Diego president Andy Berg, "It proves the contractor’s commitment and ability to build an exceptional project. Winning the award two years in a row is an even more phenomenal feat that shows that not only is the contractor capable of providing excellence for their customers, but also that they are committed to providing that quality of product on every one of their projects. We are very proud of our NECA San Diego Chapter Member Sullivan Solar Power on their back to back awards."

The prestigious NECA Project Excellence Award was established to showcase the exceptional work that NECA’s members perform throughout the United States. Sullivan Solar Power will be recognized along with this year’s other winners on Monday, September 16, during NECA’s annual convention in Las Vegas.

Last year, Sullivan Solar Power was awarded the Project Excellence Award in the Green Buildings Under $1 Million category for the now well-known solar installation at Petco Park for the San Diego Padres in San Diego. It is the largest solar installation in any Major League Baseball (MLB) stadium. It is larger than all seven other MLB solar systems combined and will produce over 12 million kilowatt hours over the next 25 years, the equivalent to disconnecting over 1,200 homes from the grid.

The award-winning Cathedral City High School installation was customized specific to the needs of the school. The state-of-the-art system utilizes a low-profile design, which keeps the system’s height shorter than the gymnasium’s parapet wall at all points. This design allows for an aesthetically pleasing finished product while maintaining the expected production of the system. The solar project consists of 319 high performance SunPower solar modules which will generate 177,794 kilowatts per year. It will offset more than $57,000 in utility costs annually and includes a full 25-year product and workmanship warranty, as well as Sullivan Solar Power’s own ten-year production guarantee.

"We are honored and proud to receive the NECA Project Excellence Award two years in a row," stated Sullivan Solar Power founder and president Daniel Sullivan, "This award is a testament to our outstanding IBEW electricians, our workmanship and commitment to moving our region towards a renewable energy future."

Sullivan Solar Power has been changing the way Southern California generates electricity for 15 years and was recently recognized by Solar Power World as a top solar and storage installer. Take a look at our award-winning solar installations in your area.