When the local band Switchfoot takes the stage this Saturday to play a concert on the beach for a crowd of 15,000 of their hometown fans, they’ll be rocking with the power of the sun. 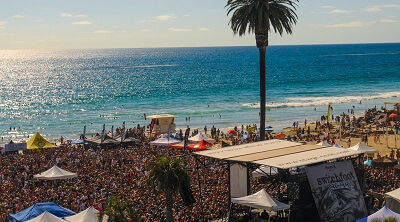 Mark McLarry, CEO of Alternative Power Productions, said his environmentally minded production company has seen the band’s annual charity event, which raises money for local at-risk kids, grow from a single-day concert with few hundred people to a weeklong event that draws thousands of Switchfoot fans from all over the world.

“It’s changed and grown quite a bit over the years, where the crowd has gone from hundreds of people to 15,000 now,” McLarry said.

This weekend, Switchfoot and other bands will perform on the company’s largest stage, the Helios SL250, which packs a 7.5 kw solar array that runs through four 30-amp Outback inverters. Electricity generated by the stage directly from the sun’s rays is stored in two 800-amp batteries and used to power all the guitar amps and other sound equipment on the stage, McLarry said.

“If the weather is like it has been, we can float, which means we can bring in more power than we’re using,” McLarry said.

The solar-powered stage that Switchfoot and the other BroAm bands will perform on this weekend is making its first appearance at the event, but it is not new to big rock ‘n roll shows. Last summer, the same stage was part of the Vans Warped tour, which appeared in 43 cities across the country over 50 days, McLarry said.

A solar-powered stage fits right in at the BroAm, since Switchfoot has made environmental consciousness part of the event by including a beach cleanup, recyclable water bottles and other earth-friendly elements to their annual charity event.

McLarry said some of the bands that perform on his company's stages aren’t even aware that they are solar powered because the panels generally are placed on the fold-up sides and roof of the stages and not seen from below once the stage is set up.

“A lot of times, people don’t even know, because once the doors go up, you’re not exposed to the solar panels,” McLarry said. “Then when we tell them, ‘This whole stage is solar powered,’ they’re all just blown away. They say, ‘This whole thing is running on solar? No way!’”

The Switchfoot BroAm will be held Saturday July 9 at Moonlight Beach in Encinitas. The event is free, open to all ages and features a surf contest in the morning and concert starting at 11 am. The popular rock band headlines the event, which ends at 5 pm. Click here for more information.