The week of September 10 to 18 marked National Drive Electric Week and highlighted the momentous progress that has been made in revolutionizing the way we generate and consume energy.

Earlier this month, the United States reached a significant milestone with over half a million plug-in electric cars now on our roads. This highlights the growing movement towards sustainable transportation in the nation, which has also been embraced by Sullivan Solar Power since 2014 with the addition of the Toyota RAV4 EV to our fleet. 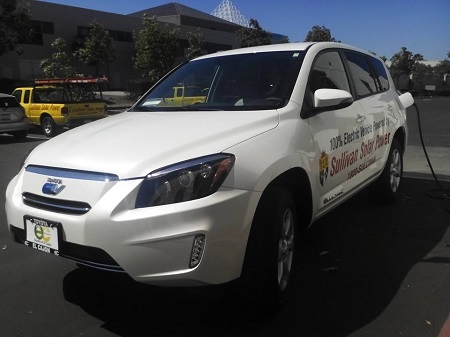 For Rick Rios, manager of project management at Sullivan Solar Power, purchasing the Chevy Volt electric hybrid vehicle was a no-brainer, having recently gone solar. Since Rios installed a 5.1kW solar system with Sullivan Solar Power, he and his wife were able to completely offset their electricity bill and have surplus energy to power their home and electric vehicle with clean and sustainable energy.

“Getting our solar up has provided us the flexibility to save money while diminishing our carbon footprint,” said Rios. “The best part about our electric vehicle is driving by those awful fuel lines and moving on with my life.”

Sullivan Solar Power’s Director of Human Resources Parag Mody and his wife now meet their transportation needs entirely through electric vehicles, with both driving the Toyota Prius Plug-in vehicle. For the Mody family, the consumer incentives, such as the fact that the EV also qualifies for the carpool stickers, reducing commuting time, also made the purchase of an electric vehicle more affordable and attractive.

“We love owning an EV vehicle,” said Mody. “Not only are we able to utilize clean energy, I love the fact that I am able to charge our car at our workplace. In addition, it feels great to know we are doing our part to lead the energy revolution!”

“I absolutely love driving an electric vehicle. No more stops for gas and no maintenance at all! I charge it at work and is the perfect solution for my daily commute and errands during the weekends,” she said. “It also forces me to drive a lot more consciously, since the battery recharges when you slow down or press the brake.”

In addition to helping reduce fossil fuel emissions from driving a vehicle to work, the commute provides many health benefits.

“We recently bought an e-Bike to reduce fossil fuel consumption and have fun riding,” said Seymour. “This electric bike will soon replace our second car.”