In a highly anticipated move, Mayor Kevin Faulconer announced San Diego’s intent to move forward with a Community Choice Aggregation (CCA) program last week. The program will create an alternative to the area’s investor-owned utility, San Diego Gas and Electric, and will pave the way for the City of San Diego to reach its goal of 100 percent renewable energy by 2035 as laid out in its 2015 Climate Action Plan.

At a press event last Thursday at City Hall, the Mayor placed heavy emphasis on the value of choice in an area where there has traditionally been none. 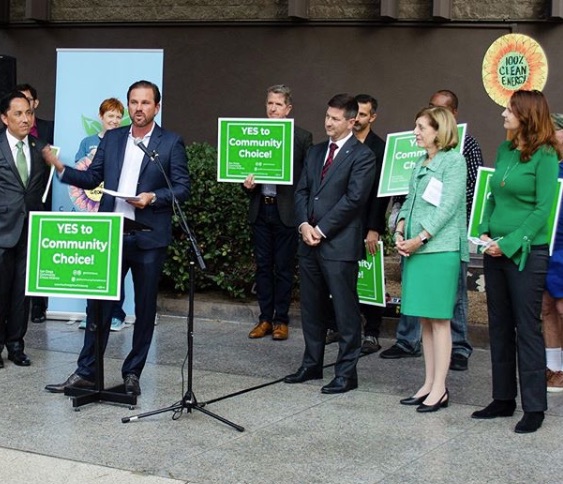 “I want San Diego to lead this region into a cleaner future,” Mayor Faulconer said. “This gives consumers a real choice, lowers energy costs for all San Diegans, and keeps our city on the cutting edge of environmental protection.”

Those in favor of CCA argue that it breaks up the utility’s monopoly and reduces energy cost by putting the buying power in the hands of the city. With SDG&E rates steadily increasing at a rate of 15 to 20 percent last year alone, and consistently ranking among the highest utility rates in the country, competition in the marketplace seems well overdue.

While the Mayor’s support is a major step forward, the program still awaits final approval from City Council. Pending approval, all San Diego residents will automatically be enrolled in the program, with the option to opt-out and remain an SDG&E customer should they choose.

The San Diego community is taking this time to celebrate the Mayor, his decision, and all the hard work and advocacy that brought this moment to fruition. But in reality, the work has just begun. City Council’s approval would kickstart a two-year process to organize and implement a successful CCA program for the city, with the formation of a Joint Powers Authority (JPA) and appointment of its board of directors. Once established, the JPA can work to hire an executive leadership team, including a CEO and CFO, to oversee the success of the program. From there, the JPA must seek approval from the California Public Utilities Commision with the long-term goal of delivering power to the communities as early as 2021.

Mayor Faulconer’s support is a testament to grassroots efforts affecting real change. The push for CCA in San Diego was the result of tireless efforts from a number of dedicated community groups and individuals, including those with the San Diego Community Choice Alliance (SDCCA). This alliance of business leaders, activists and community members fought tooth and nail to encourage the City of San Diego to enact Community Choice Energy in 2018.

SDCCA’s vision was also supported by activists with Climate Action Campaign (CAC), an organization committed to stopping climate change. CAC and their allies have engaged the community in widespread education and outreach throughout San Diego on the benefits of adopting Community Choice. It is the hard work and dedication of SDCCA, CAC and their partnering organizations that deserves thanks for this huge opportunity for San Diego to revolutionize it’s grid and make clean, affordable energy available for all.

Local business, Sullivan Solar Power, has been an early supporter of SDCCA and long-time partner with CAC. All groups were thrilled to share in the celebration at last weeks press event with Mayor Faulconer.

Daniel Sullivan, founder and president of Sullivan Solar Power, and native San Diego resident, was among the speakers at the event.

“Through the adoption of Community Choice Energy we will move our City to 100 Percent renewable energy. This means clean air for all, a massive boost to our local economy, thousands of new jobs, and, most importantly, a brighter future for our children and grandchildren.”

Sullivan founded his company with nothing more than a truck, $5,000 in the bank, and a dream of drastically changing the way this world generate electricity. Having the support of the entire city behind that mission is a major victory for a dream born of such humble beginnings.

This landmark moment is something for San Diegans and Californians alike to be proud of. This state continues to show the nation and the world that an equitable clean energy future is here, today.